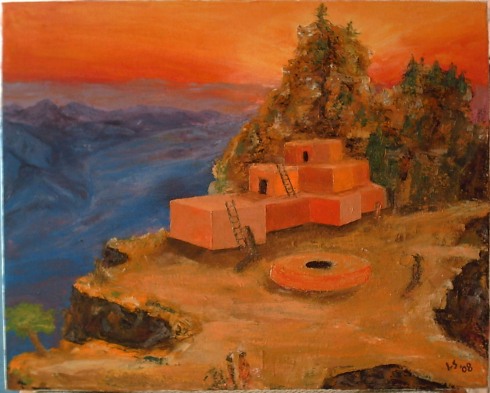 I have discovered a shocking piece of information that has caused me to re-think my dream of traveling the length of Central America on my way to Peru. Of course I’m not the first person to conceive of the idea to take the Pan-American Highway from one end to the other. Perhaps someone has even started in Alaska and ended up in Patagonia, Chile. Anyone that has, will have encountered one great, impenetrable obstacle to their plan: what is known as the Darien Gap. Apparently the roads south of the Panama Canal Zone dwindle down to nothing, followed by hundreds of miles of solid, primordial jungle. Even if it is not true that you have to have a machete or chainsaw to cross into Columbia and beyond, there are plenty of other reasons not to attempt it. The sparse population reportedly consists of criminals, guerillas, DEA, indigenous tribes zealous to protect their hunting grounds, and various other types that are far from hospitable to strangers.
I knew about Darien long ago, and had no delusions of facing that much adventure. I figured a flight from Panama to Bogota, Columbia wouldn’t be more than a few hundred dollars. Wrong. THIS is what I find shocking: from all my preliminary searches, flights from Panama to Columbia, or Costa Rica to Ecuador, or any other likely way to jump the Gap, are roughly the same price as flights directly from Tucson, AZ to Lima, Peru!! Supposedly there was once a couple of discount airlines that offered reasonable flights, but they’ve been bought out by the big boys. It appears that any flight, regardless of distance, that connects North America to South America costs at least $750 plus taxes and fees. I really find this hard to digest.
So this is what causes me to re-think my dream. I had a vision of becoming a human bridge, connecting friends and acquaintances from North America to South America. Well, I suppose that is still possible, but I don’t think I can do it in one trip. Perhaps building a bridge between cultures will require forming a solid foundation in Northern Mexico and Peru, then slowly branching further afield year after year. And maybe, just maybe, by the time I reach Panama there will be another discount airline in operation.

About Art by Lowell

I am an artist who specializes in impressionist and cubist oil painting. I am also a musician who performs under the stage name of Luis Sabor, singing, playing acoustic guitar, and the percussion instrument Guiro. I currently call Victoria, Texas home and like to travel throughout Central America, where I meet wonderful people, hear wonderful music, and get ideas for a sustainable living project in the Sonoran Desert. END_OF_DOCUMENT_TOKEN_TO_BE_REPLACED
This entry was posted on Thursday, March 15th, 2012 at 10:48 AM and tagged with arizona, art, desert, dreams, impressionist, landscape, Mexico, paintings, southwest, surrealist, travel and posted in Dream Reality, Mexico, Oil Paintings. You can follow any responses to this entry through the RSS 2.0 feed.
« Promoting Literacy in Latin America
Long Walk Home »