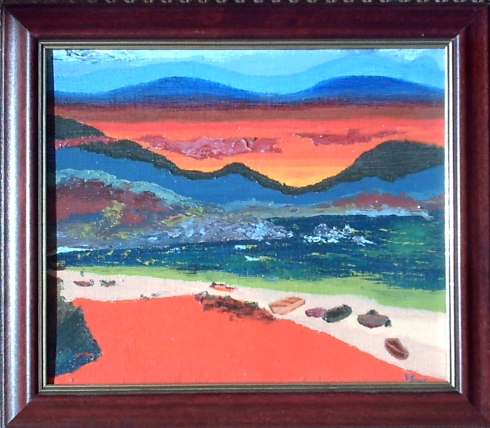 There was a short time during my youth when I liked to surf, or try to.  Texas isn’t much of a place for surfing, but occasionally, when there is a storm in the Gulf of Mexico, there are waves big enough to ride.  For years I would paddle out to the big waves, get pounded, occasionally stand up for a few seconds, then exhaust myself fighting the waves again.  Then one weekend I was taught how to surf by someone who knew how.  He showed me how to use the rip current near the jetty to paddle past those pounding waves, then pass up the second line of breakers I had always stayed at.  He taught me to go beyond the third line of breakers, where the sea was calm—this is what is known as “outside.”  It was beautiful there, just sitting on your board and rolling with the swells.  The trick, it turned out, was to look toward the horizon and see the big swells coming—then paddle like mad so you were matching the speed of the wave at the moment it broke.  That’s when you can really get a good ride.  Then, after a nice ride, you have to peel off and get back “outside” before the wave moves you to the second line of breakers.

I was a waiter at the Lone Star Café at the time, and there was a serious surfer, named Bryan, working there as well.  It occurred to me on a busy Friday night how analogous the work was to surfing.  I kept telling Bryan, “ I can’t get to the outside, I’m getting pounded,” and he would nod knowingly, “ right on.”  The more I thought about it, and I still think about it, almost everything we engage in can be viewed in terms of surfing.  The reason is this:  everything in our physical reality, relative to time, is rising and falling, growing and decaying, coming and going, in a wave-like fashion.  We are on an ocean of change, and every entity and event in our lives is behaving like a wave.  So here are a few points to my “surfing philosophy” or “wave theory” and how they may be applied to one’s life:

1)      Find the rip current—“go with the flow,” why take a pounding and wear yourself out?  There is an easier way.

2)      Get to the “Outside”—its worth the effort to reach your goal.  Settling for the first line of breakers could be painful and tiring. (This one is difficult to be sure about, I guess you have to use your intuition to know where “outside” is.)

3)      Relax, and look to the horizon—contemplate the future, and try to visualize that perfect wave before it arrives.

5)      Keep your balance—riding a wave is a heady experience, don’t slip up.

6)      Peel off and get back “outside”—notice when it is time to move on, or you might get pounded and have to work a lot harder to get back to where you were. (again, you have to use your intuition here.)

Personally, I feel that I’ve been “outside” for several years now, and at the moment I’m paddling like mad.  I’ll let you know if I catch the wave, but its looking good so far.